A major monument to admire during your dinner cruise, Notre-Dame de Paris, or simply Notre-Dame to Parisians, is the cathedral of the Catholic Archdiocese of Paris. Today, Notre-Dame de Paris is not the largest of French cathedrals, but it is unquestionably one of the most remarkable examples of Gothic architecture in the world. This masterpiece, one of the best-known symbols of the French capital, is located at the eastern end of the Ile de la Cité, the city's historic centre. 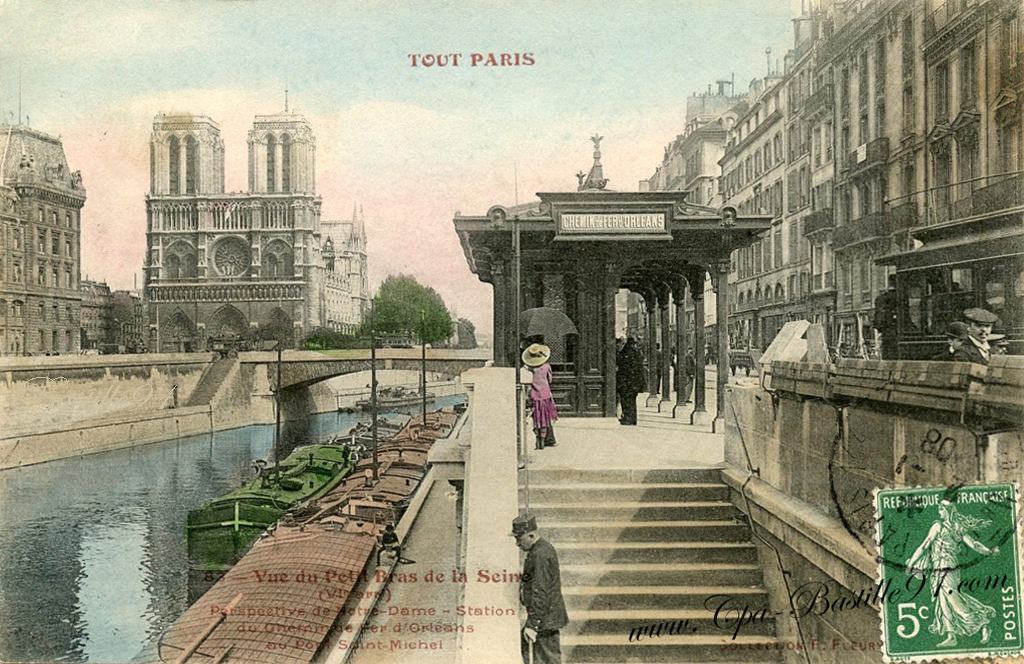 The Conciergerie is the main vestige of the former Palais de la Cité, which was the residence and seat of power of the kings of France from the 10th to the 14th century and which extended over the site of the present-day Palais de Justice de Paris. Today, the building runs along the Quai de l'Horloge, on the Île de la Cité. It was converted into a state prison in 1370, after the palace was abandoned by Charles V and his successors. The prison occupied the ground floor of the building along the Quai de l'Horloge and the two towers; the upper floor was reserved for the Parliament. During the Terror, the Conciergerie prison was considered the antechamber of death. So, when you are on board our restaurant boat, think of them, because very few of them ever got out free. Queen Marie-Antoinette was imprisoned there in 1793. 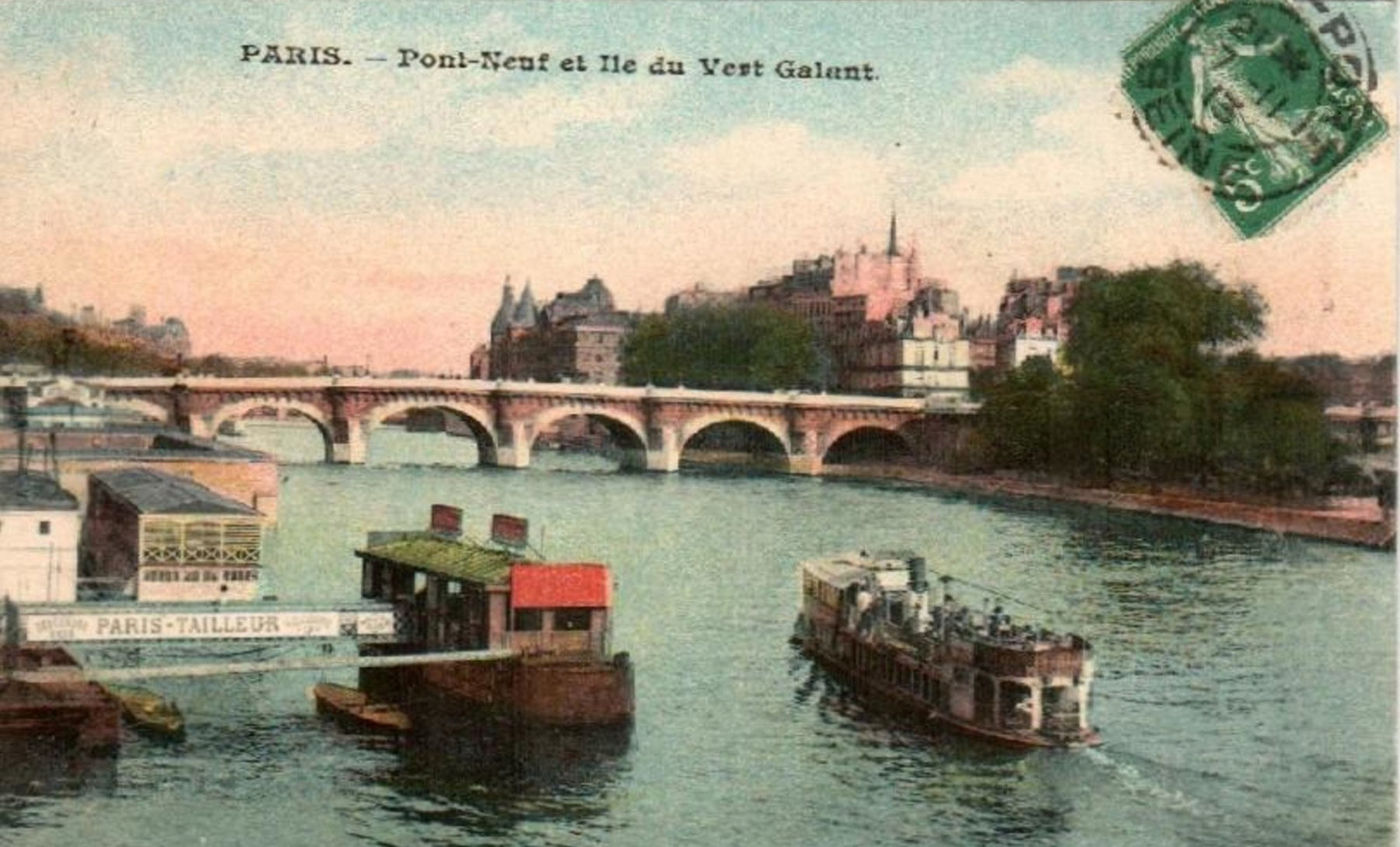 Despite its name, the Pont Neuf is the oldest bridge you will pass under during your dinner cruise. Also the oldest bridge in Paris, construction of the Pont Neuf began on 31 May 1578 and was completed in 1607. It differs from other Parisian bridges in many ways. Firstly, it was the first bridge to cross the Seine in its entire width, linking the left bank, the right bank, and the western end of the Ile de la Cité. It has pavements (the first in Paris) and semi-circular "balconies" above each pier, where merchants and artisans shop. Finally, you will notice when you are on board our restaurant boat that along its cornices are sculpted 385 grotesque masks by Germain Pilon.

The Pont des Arts (or the Passerelle des Arts) links the Institut de France and the square courtyard of the Louvre palace (which was called "Palais des Arts" under the First Empire). Between 1801 and 1804, a nine-arched cast-iron footbridge was built on the site of the current Pont des Arts: it was the first metal bridge in Paris. This innovation is due to the first consul Napoleon Bonaparte, following an English design. The engineers Louis-Alexandre de Cessart and Jacques Dillon designed the bridge to resemble a hanging garden, with shrubs, flower boxes and benches. In 1976, the inspector general of the Ponts et Chaussées reported the fragility of the structure, mainly due to the bombings of 1918 and 1944 and several boat collisions. The bridge was closed to traffic in 1977 and collapsed over 60 metres two years later in a final collision with a barge. The current bridge was rebuilt between 1981 and 1984 "identically" according to the plans of Louis Arretche, who reduced the number of arches (seven instead of nine), allowing them to be aligned with those of the Pont Neuf, while retaining the appearance of the old footbridge. Sometimes used as an exhibition space, it is now a place that attracts painters, draughtsmen and photographers (for its unique viewpoint), but also picnic lovers during the summer and lovers who come to hang a padlock, the eternal symbol of their love. During your dinner cruise on board a restaurant boat, take a good look at the railings... You will find many padlocks symbolising the love between two people...

The Louvre Palace is a former royal palace located on the right bank of the Seine, between the Tuileries Gardens and the Church of Saint-Germain-l'Auxerrois. Covering an area of more than 135,000 m², the Louvre Palace is the largest palace in Europe, and the second largest building on the continent after the Romanian House of Parliament. It is now one of the richest art museums in the world. The Louvre is the largest museum in Paris (210,000 m2 of which 68,000 m2 are dedicated to exhibitions) and one of the most important in the world. The Louvre has a long history of artistic and historical preservation of France, from the Capetian kings to the present day. A universalist museum, the Louvre covers a wide chronology and geographical area, from Antiquity to 1848, from Western Europe to Iran, via Greece, Egypt and the Near East. It is made up of eight departments: Oriental Antiquities, Egyptian Antiquities, Greek, Etruscan and Roman Antiquities, Islamic Arts, Sculptures, Works of Art, Paintings, and Graphic Arts, and presents 35,000 works in 60,600 m2 of rooms. The works are varied in nature: paintings, sculptures, drawings, ceramics, archaeological objects and objets d'art among others. Among the most famous pieces in the museum are the Code of Hammurabi, the Venus de Milo, Leonardo da Vinci's Mona Lisa, and Eugène Delacroix's Liberty Guiding the People. Finally, the Louvre is the most visited museum in the world, with 8.5 million visitors in 2008.

The Musée d'Orsay is a national museum located on the left bank of the Seine, in the 7th arrondissement. Housed in the former Orsay train station (1898), its collections include Western painting and sculpture from 1848 to 1914, as well as decorative arts, photography and architecture. Masterpieces such as Manet's Olympia, Degas' Little Dancer aged fourteen and Courbet's Origin of the World are on display. 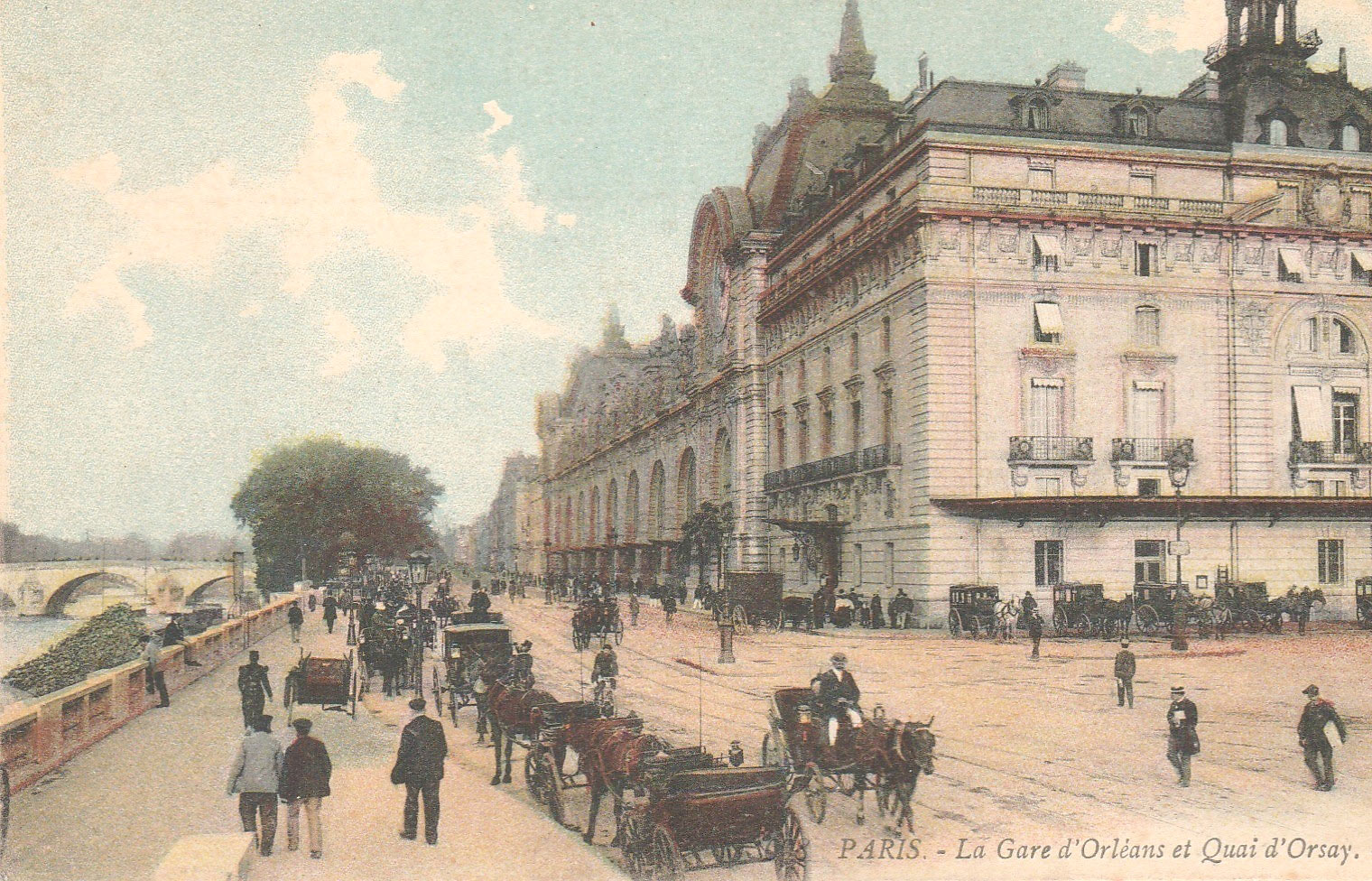 The Place de la Concorde, which is the largest square in Paris, is located along the Seine and separates the Tuileries garden from the beginning of the Champs Elysées. It is located in the 8th arrondissement. The architect of Louis XV, Jacques Ange Gabriel, started to build it in 1754 and completed it in 1763. It was then called the Place Louis XV. The square was made to house an equestrian statue of Louis XV that the City of Paris had commissioned in 1748 from Bouchardon as a gift to the king. From an urban point of view, it is the greatest achievement of the Age of Enlightenment in the capital. It became the Place de la Révolution, where the guillotine that executed Louis XVI, Marie-Antoinette, Danton and Robespierre and 2800 other people between 1793 and 1795 was located. After the Revolution it underwent a series of transformations and changed names several times: Place de la Concorde, Place Louis XV again, Place Louis XVI, Place de la Charte, and Place de la Concorde again to symbolise the end of a troubled era and the hope of a better future. The square retains the general appearance it had in the eighteenth century. The statue of Louis XV, removed during the Revolution, has been replaced by the Obelisk of Luxor offered by the Viceroy of Egypt, Mohamed Ali, to Louis Philippe.

Intended to symbolise the Franco-Russian friendship, established by the signing of the alliance between Tsar Alexander III of Russia (1845-1894) and the President of the French Republic, Sadi Carnot (1837-1894), it was inaugurated for the Universal Exhibition in Paris in 1900, as indicated by the inscription engraved on the column, on the right bank downstream: "On April 14, 1900, Emile Loubet, President of the French Republic, opened the Universal Exhibition and inaugurated the Alexandre III Bridge". 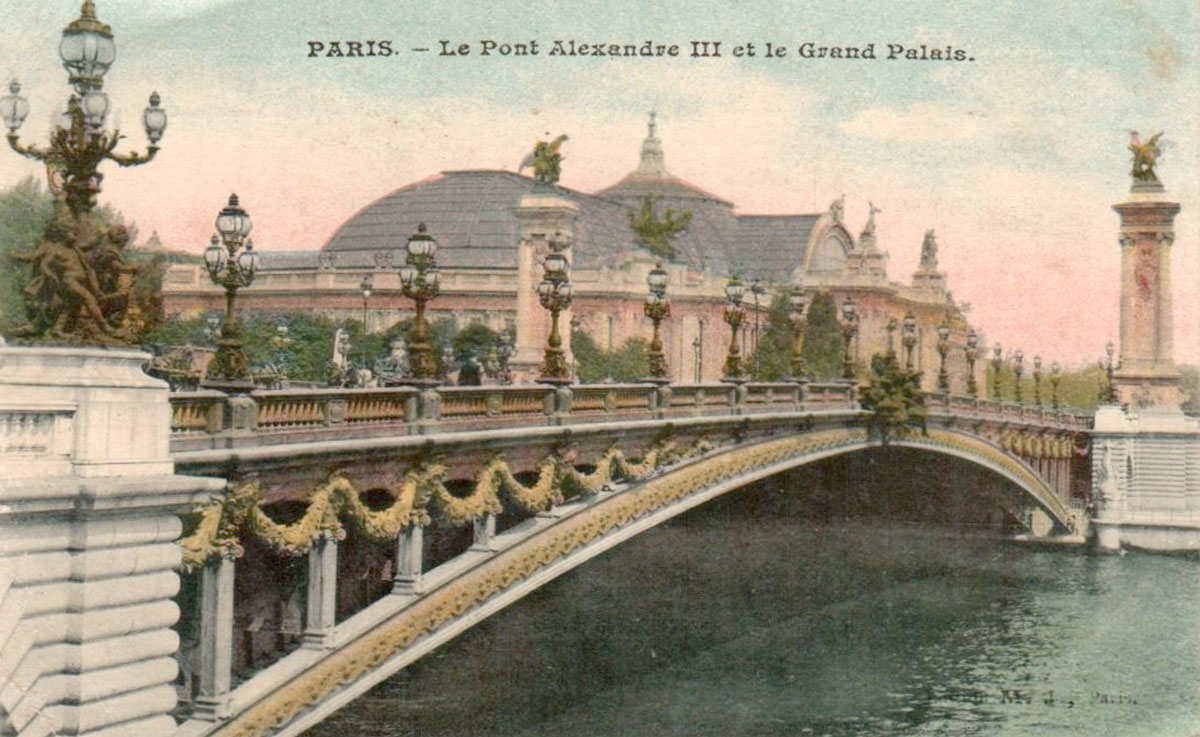 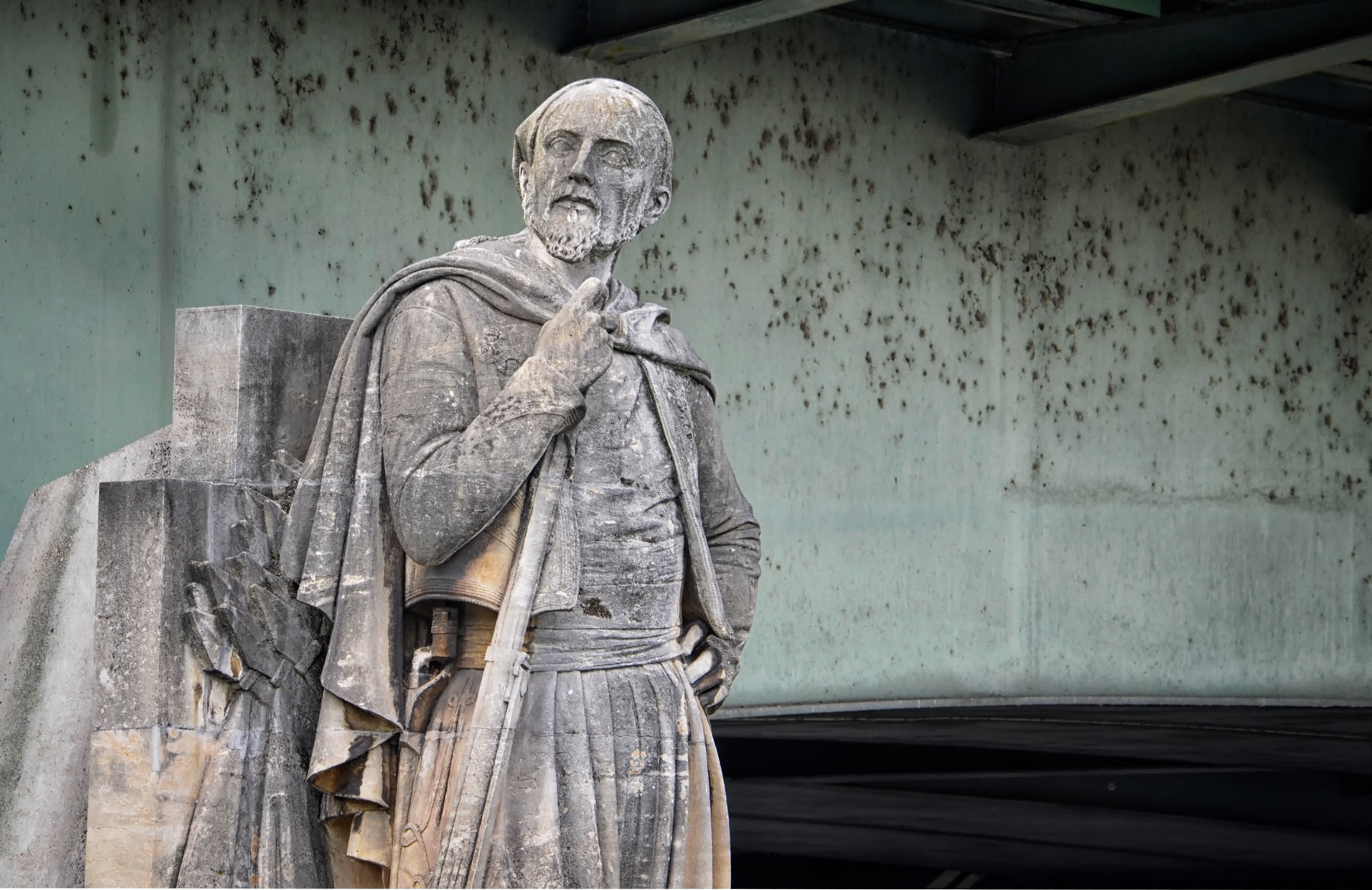 Built from 1854 to 1856 under the direction of Gariel, it was inaugurated by Napoleon III on 2 April 1856 (initially its inauguration was planned for the 1855 exhibition). Originally decorated with four statues - a Zouave and a grenadier sculpted by Georges Diebolt, a chasseur à pied and an artilleryman sculpted by Arnaud - representing four regiments that fought valiantly in the Crimean War, the Pont de l'Alma is only decorated today by its Zouave, which is used as a popular instrument to measure the flooding of the Seine. When the level of the Seine reaches the feet of this Zouave, the riverside roads are generally closed. When the water rises to the thighs of the Zouave, the Seine is no longer navigable. During the historic flood of 1910, the water rose up to the shoulders.

The Musée du quai Branly or Museum of African, Asian, Oceanic and American Arts and Civilisations (non-Western civilisations) is located on the Quai Branly in the 7th arrondissement of Paris, on the site formerly occupied by the Ministry of Foreign Trade. An ambitious project led by Jacques Chirac and designed by Jean Nouvel was inaugurated on 20 June 2006. You can discover the Hei-tiki pendant (Maori), the mask representing the hare (Dogon), the pair of ibeji twins (Yoruba), the shaman's costume (Evenk) or the "buffalo dance" cloak (Mississippi Valley)... 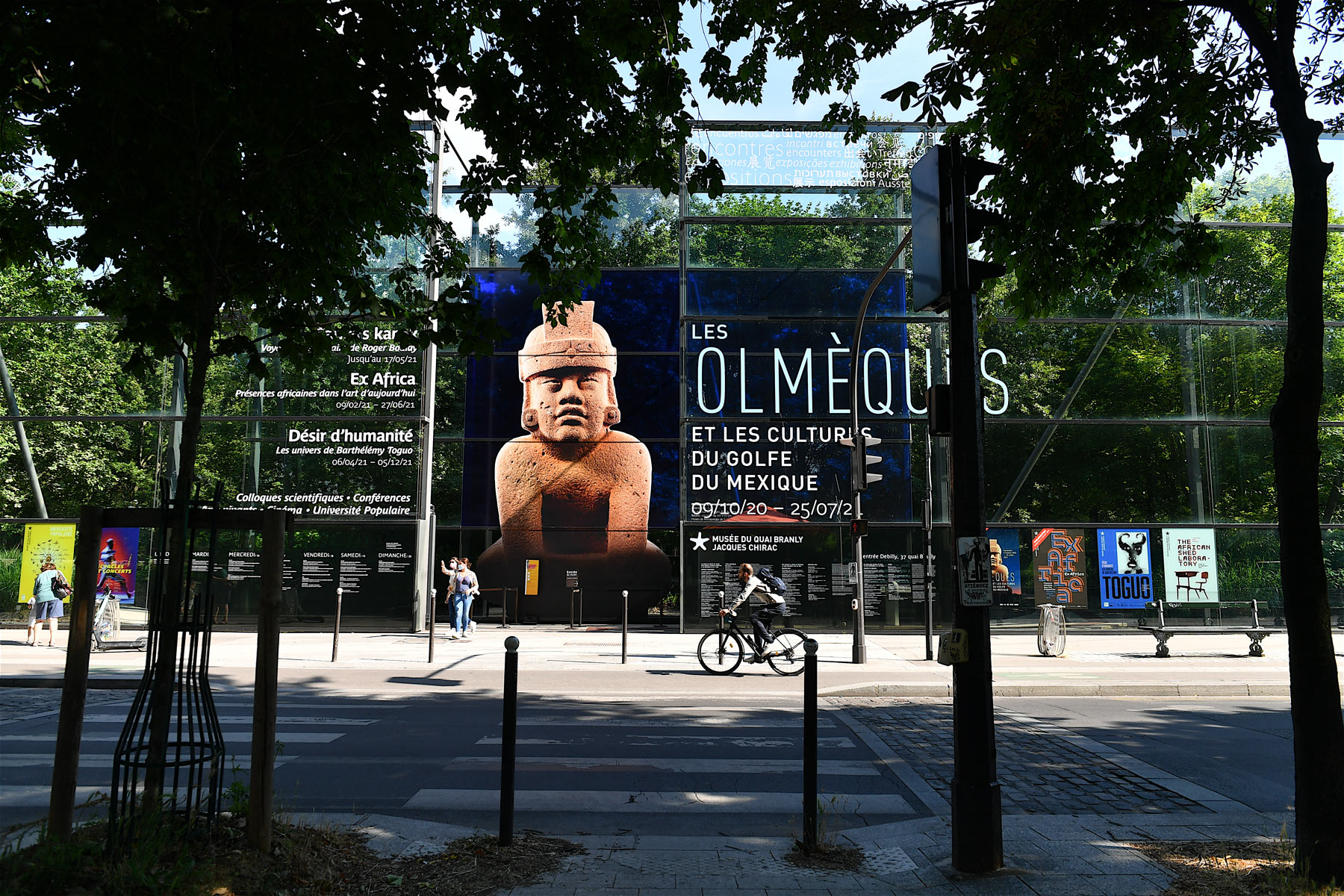 The Eiffel Tower, originally named the 300-metre tower, is a puddle iron tower built by Gustave Eiffel and his collaborators for the 1889 Paris World Fair. Located at the end of the Champ-de-Mars park, on the banks of the Seine, this Parisian monument, symbol of the French capital, is the ninth most visited site in the country in 2006 and the first paying monument visited in the world with 6.893 million visitors in 2007. Originally 313.2 metres high, it was later extended by numerous antennas to reach its current height of 325 metres thanks to the TNT transmitter. In the past it was used for numerous scientific experiments, and today it is used as a transmitter for radio and television programmes. It took only two years and two months to build and one person died on the site: an Italian worker, Angelo Scaglioti, who fell from the first floor after construction was completed. 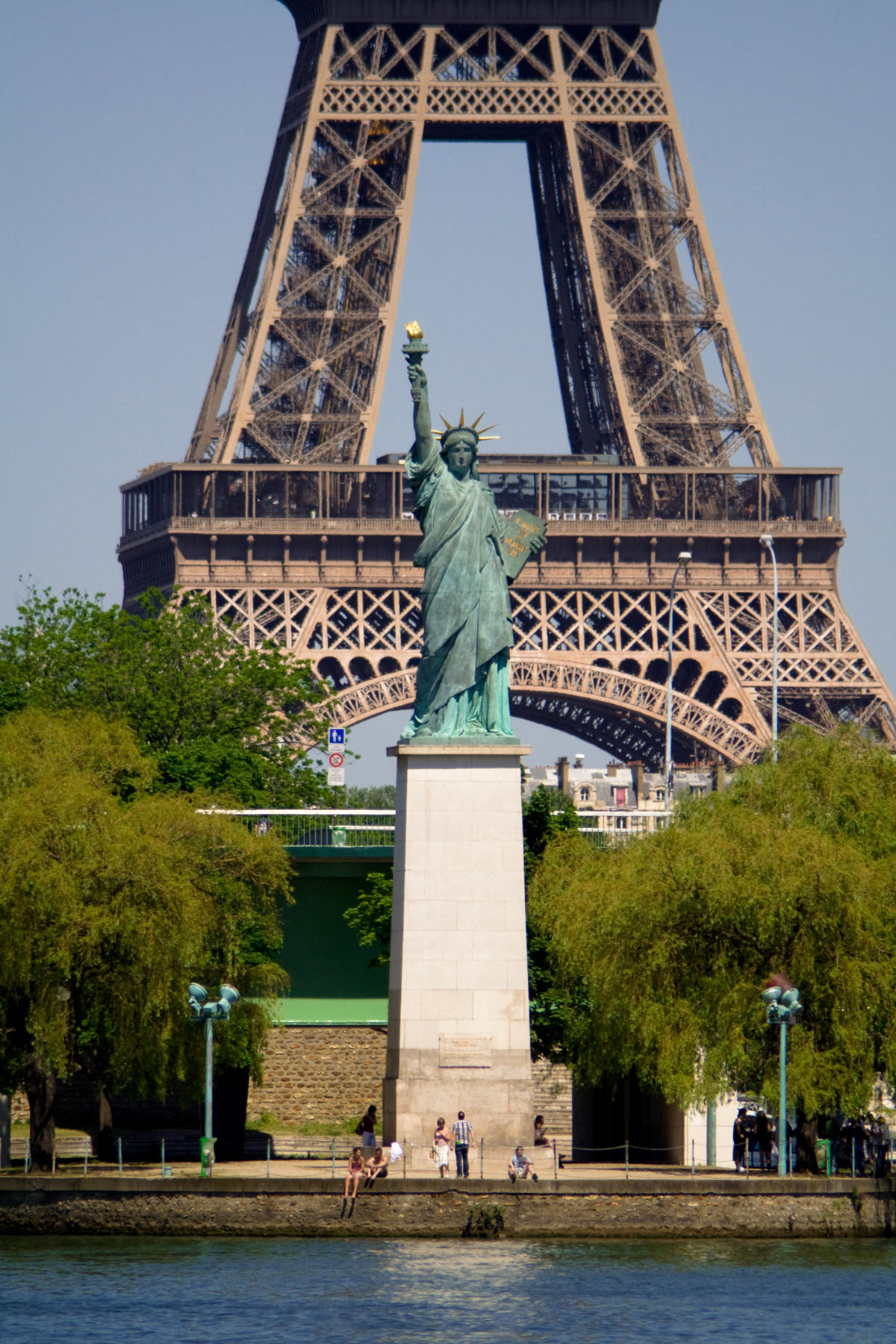 Built in 1827, the Ile aux Cygnes was originally a dyke, constituting one of the elements of the river port of Grenelle, which was then completed by a river station, i.e. a depot for goods, and by the Grenelle bridge. It is also known for hosting a famous replica of the New York "Statue of Liberty" since 1889. Offered to France by French citizens living in the United States, it was transported to the island in June 1889, on the occasion of the centenary of the Revolution and the Universal Exhibition, and was inaugurated by President Carnot on July 4. Installed at the time to face the Eiffel Tower and the Elysée Palace, it was turned upside down during the 1937 Universal Exhibition because its original installation made it turn its back on the United States, which greatly displeased its creator, Bartholdi. The more curious will notice that the booklet she holds in her left hand bears the inscription "IV July 1776 = XIV July 1789", the respective dates of the American and French revolutions.

You can find out more about which cookies we are using or switch them off in settings.

This website uses cookies so that we can provide you with the best user experience possible. Cookie information is stored in your browser and performs functions such as recognising you when you return to our website and helping our team to understand which sections of the website you find most interesting and useful.

Strictly Necessary Cookie should be enabled at all times so that we can save your preferences for cookie settings.

If you disable this cookie, we will not be able to save your preferences. This means that every time you visit this website you will need to enable or disable cookies again.

This website uses Google Analytics to collect anonymous information such as the number of visitors to the site, and the most popular pages.

Please enable Strictly Necessary Cookies first so that we can save your preferences!